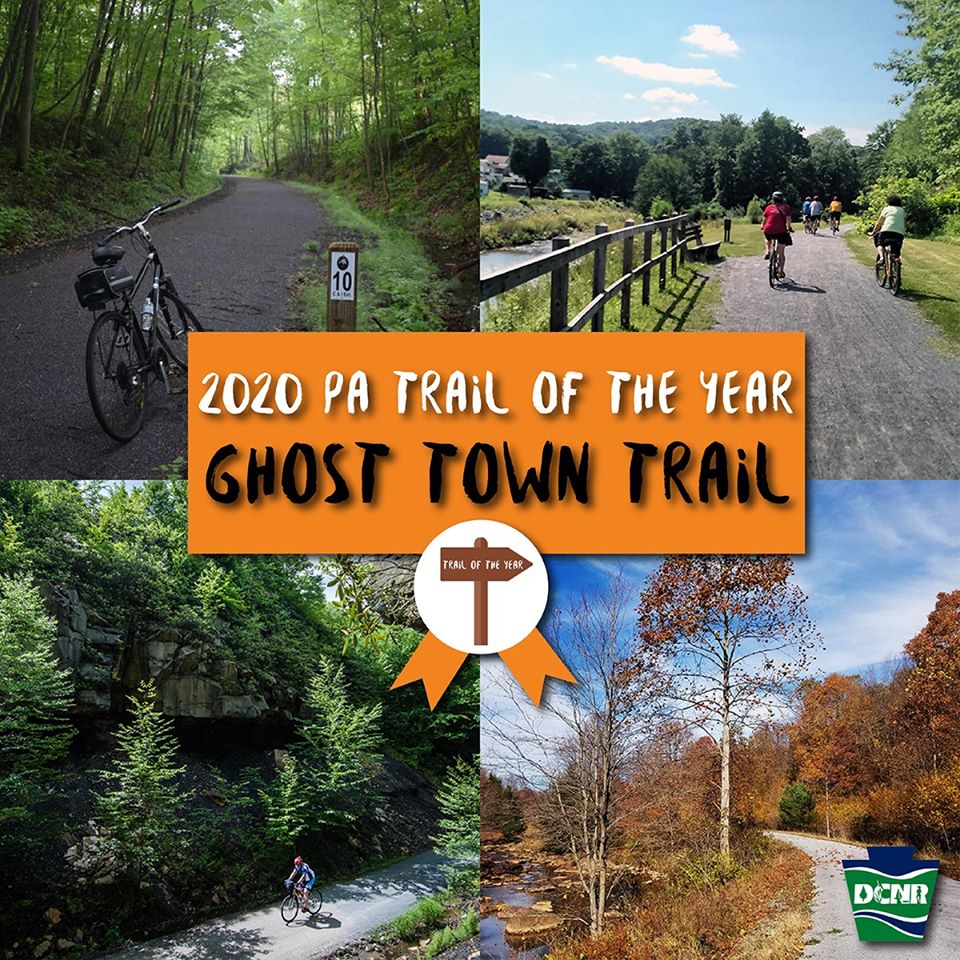 Department of Conservation and Natural Resources Secretary Cindy Adams Dunn announced The Ghost Town Trail has been named Pennsylvania’s 2020 Trail of the Year.

“Rich with the history of railroading and former coal mining towns along its 46-mile route, the Ghost Town Trail, like so many trails throughout Pennsylvania, captures the spirit of an industrial past and the promise of a recreational future,” said Dunn.

DCNR states that Pennsylvania is a national leader in trail development, providing its citizens and visitors with more than 12,000 miles of trails across the commonwealth, from gentle pathways threading through miles of preserved greenways, to remote, rugged trails scaling the state’s highest mountains.

The Ghost Town Trail is cooperatively managed by the Cambria County Conservation & Recreation Authority (CCCRA) and Indiana County Parks & Trails. The trail was formed in 1994, originally as a 12-mile segment, following the path of long-gone coal-mining communities, rightfully designating its name.

“The Cambria County Conservation & Recreation Authority is honored to have the Ghost Town Trail selected as the DCNR Trail of the Year. The staff of the CCCRA and Indiana County Parks and Trails work very hard to make The Ghost Town Trail a premier trail destination, and this recognition shows how hard work pays off,” said CCCRA Executive Director, Cliff Kitner, in response to hearing of the recognition.

“Indiana County Parks & Trails greatly appreciates DCNR’s recognition of the Ghost Town Trail as the 2020 Trail of the Year,” said Indiana County Parks & Trails Director, Ed Patterson. “The trail’s establishment and development over the past 25 years is a testament to the shared effort and vision of many partners who have contributed to the trail’s success and popularity.”

The trail system is now 46-miles in total, extending from Blairsville, Indiana County, to Ebensburg, Cambria County. The main stem of The Ghost Town Trail is 32-miles long, and includes a 14 mile extension. With only 5.5 miles of the extension left to complete, The Ghost Town Trail is very close to becoming the first continuous loop of rail trail in Eastern United States History.

In 2019 the trail celebrated its 25th anniversary, and has received other honorable recognitions since its birth. It was designated as a National Recreation Trail in 2003 and was ranked as 7th on the “Best Hiking Trails in the United States” by American Towns Media in 2016.

“This is exciting news and this honor did not happen by accident,” said Cambria County President Commissioner Tom Chernisky. “For many years the Cambria County Conservation & Recreation Authority and Indiana County Parks & Trials have worked together to acquire, construct, and maintain our trails. The Ghost Town Trail is a destination that attracts visitors from across the country, state, region and locally. The trail contributes to the health, economy, and recreation of the citizens of Cambria County.”

According to a Trail User Survey and Economic Impact Analysis completed in 2009 by the Rails to Trails Conservancy, it is estimated that the purchase of hard and soft goods and overnight hotel stays totaled about $1.7 million annually. The Ghost Town Trail sees approximately 80,000 users each year based on statistics from trail counters placed at numerous trail heads along the 32-mile main stem. The Ghost Town Trail is part of numerous regional connection plans, looking forward to continue growth in the future.