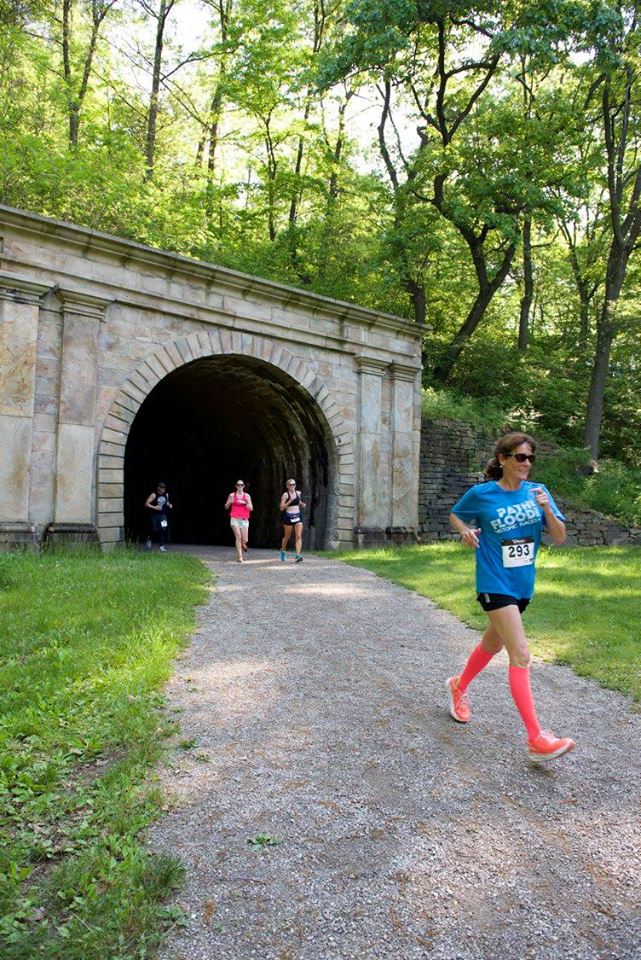 The 2017 Cambria County Trails Series opens with the fourth annual Path of the Flood Historic Races on May 27, 2017 at 8 a.m. The half marathon and 12K races are closed for registration, but the 5K can be registered for on the morning of the race. The second annual Ghost Town Trail Challenge will be on June 17, 2017, starting at 7 a.m. The Full Challenge is a 32-mile long (50k) endurance hike, which begins at 7:00 a.m. at Saylor Park in Blairsville and ends at the YPCC in Ebensburg. The Half Challenge is 16 Miles (25k), beginning at 7:00 a.m. near the Wehrum Trailhead and ending at the YPCC in Ebensburg. The Friends/Family Challenge is 7.5 Miles (12k) and begins at 7:00 a.m. at the Nanty Glo Trailhead. It also ends at the YPCC. The Jim Mayer Riverswalk Trail Family Fun Run will be on September 9, 2017, starting at 9 a.m. Kids under the age of 8 years old can participate in the Kids’ Trail Trot at 8:45 a.m. at the 5K start/finish line.

The Path of Flood Historic Races presented by the Johnstown Area Heritage Association (JAHA) and the Cambria County Conservation & Recreation Authority (CCCRA) will make waves once again as it returns to the city of Johnstown for its fourth year on Sat. May 27, 2017. Events include the Half Marathon, 12K, and 5K, all taking place on the Path of the Flood Trail. Approximately 900 participants from 24 different states are expected for this year’s Races.

“The Path of the Flood Historic Races has consistently grown each year,” said Melody Tisinger, JAHA Development Officer and Race Coordinator. “In 2016, the Races welcomed nearly 700 participants to the trail. The Races have become a sought-after event; last year we welcomed runners from 17 different states.”

JAHA is excited to welcome the Cambria Country Conservation & Recreation Authority (CCCRA) as a co-host for this year’s races. The CCCRA manages the Path of the Flood Trail, and the Races will now be part of the 2017 Cambria County Trails Series. Rec the Alleghenies, an initiative of the Community Foundation for the Alleghenies’ Youth Philanthropy Interns, is a signature sponsor for the Races and the entire Trails Series.

Thanks to the underwriting of the 1889 Foundation, youth 17 years of age and under can participate in the 12K and 5K events at no cost. This effort is to support the health and wellness of youth in our region, and to encourage more youth to get outdoors.

“We are proud to co-host the Races with JAHA and to partner with the countless other community organizations and volunteers that make this event possible,” said Leanna Bird, CCCRA Program Specialist and Race Coordinator. “This is an opportunity to showcase the natural beauty and history of our region and to positively impact the local economy.”
The course follows the Path of the Flood Trail, which traces the path of the historic 1889 flood and highlights the communities of South Fork, Mineral Point, the City of Johnstown and its boroughs. It also gives runners the opportunity to pass through the Staple Bend Tunnel, the first railroad tunnel in the U.S., which is owned and operated by the National Park Service: Western Pennsylvania Sites. The Races begin in South Fork and end at People’s Gas Natural Park in Johnstown.

“The Path of the Flood Historic Races are so much more than just a running event. This is a great opportunity for families, friends and participants of all ages and fitness levels to truly experience Johnstown history firsthand,” says Race Director Mark Voelker.

Online registration for the 5K, 12K and Half Marathon races closes on May 20th at midnight. Race Day registration is for the 5K only. Register on active.com (‘Path of the Flood Historic Races’), http://www.jaha.org/events/path-flood-races-2017/, and the event’s Facebook Page, www.facebook.com/POTFraces. The 2017 Cambria County Trails Series includes the Path of the Flood Historic Races (May 27), Ghost Town Trail Challenge (June 17) and the Jim Mayer Trail Family Fun Run (Sept. 9). More information on the Cambria County Trails Series can be found at www.cambriaconservationrecreation.com. Event proceeds benefit JAHA and the Cambria County Trails.