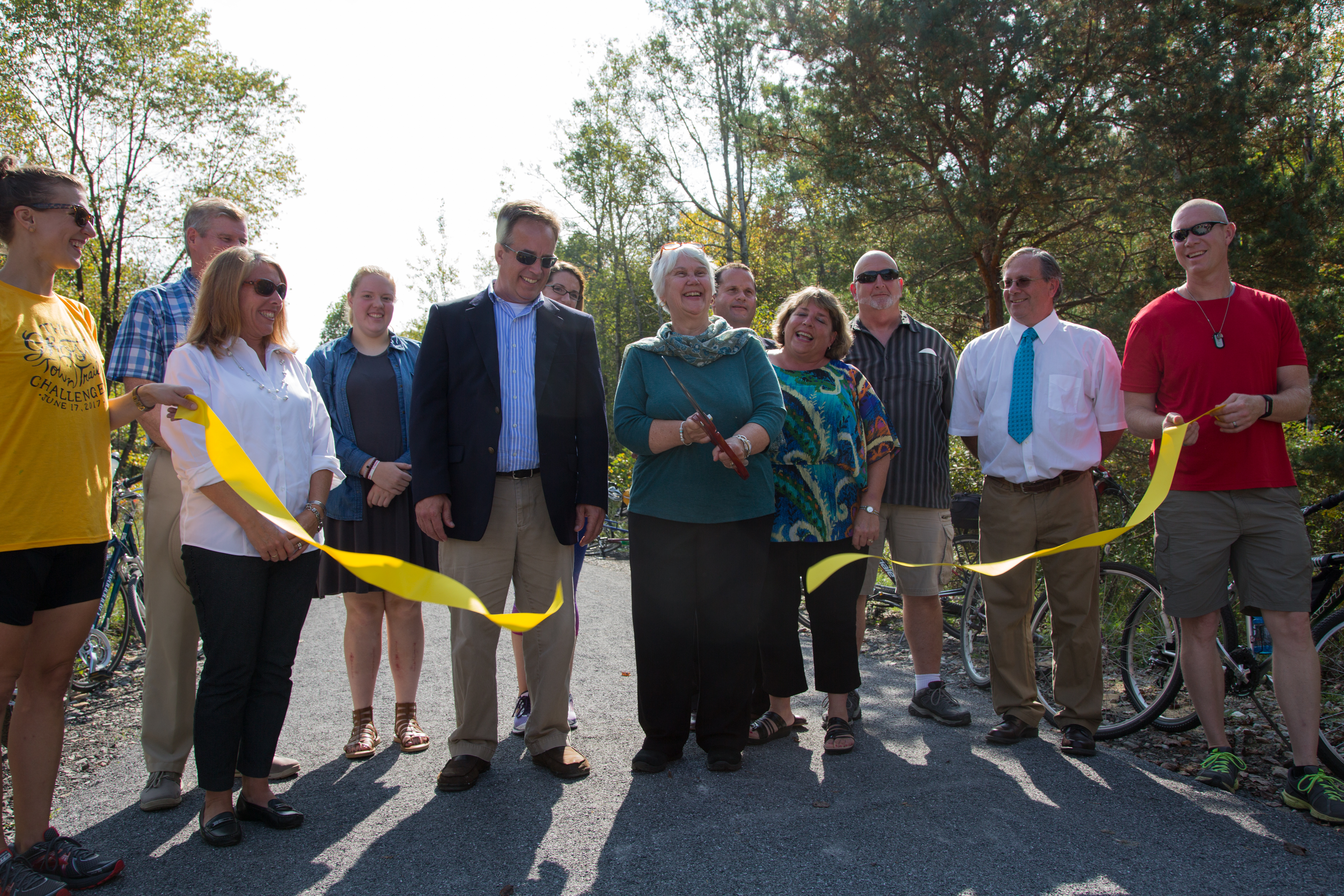 The Cambria County Conservation & Recreation Authority (CCCRA), along with the Rails-to-Trails Conservancy, project partners and local officials, held a trail dedication and ribbon cutting ceremony for the 8 mile extension of the Ghost Town Trail on Tuesday, September 26th at 10 a.m. at the Vic Miller Rd Trailhead in Belsano. An 8-mile and 16-mile bike sojourn, as well as a walking tour, followed the ceremony. All events were open and free to the public.

This 8 mile section is Phase I of a multi-phase project to complete the entire 15 mile extension. Once the remaining 7.5 miles of the extension are completed, the Ghost Town Trail will have the first continuous loop rail-trail in the United States, according to the Rails to Trails Conservancy, an American nonprofit organization based in Washington, D.C. that works with communities to preserve unused rail corridors by transforming them into rail trails within the U.S.

The completed extension will include a 32 mile loop and a 16 mile loop so cyclists and trail users no longer only have an “out-and-back” option. The extension will eventually connect the extension back onto the Ghost Town Trail in Revloc near the Rt. 219 overpass. The CCCRA is currently seeking funding for this 7.5 mile section.

Tom Sexton, Director of the Rails-to-Trails Conservancy Northeast Regional Office, was the featured speaker of the event. He participated in a bike sojourn of the C and I railroad corridor before it was a trail back in 2011 with the C and I Trail Council and others.

Other speakers included Mike Burk, President of the C and I Trail Council; Julie Doyle, co-owner of Up-N-Running in Ebensburg; Judy Strittmatter, wife of Tom Strittmatter for whom the extension will be named, and Cambria County President Commissioner Tom Chernisky, as well as others.

The extension, which follows the C and I railroad corridor from Belsano to Cardiff, was funded through a PennDOT TAP Grant, with funding assistance from the Community Initiatives Fund and the Penelec Fund for the Future of Greater Johnstown through the Community Foundation for the Alleghenies. The 8 mile extension continues from the end of the current four mile Rexis Branch spur of the Ghost Town Trail at White Mill Crossing, past Belsano Crossing, to North Street in Cardiff.

This trail extension project included the restoration of the Rt. 422 underpass trail section, which was originally built in the 1990s but has since deteriorated, as well as two large bridges. This 422 underpass section connects the current four-mile Rexis Branch spur to the new 8 mile extension by way of a short tenth of a mile on Vic Miller Rd.

History of this project spans to 1994 when the C and I Trail Council, a volunteer, nonprofit organization established to promote the development of trails and greenways in Cambria and Indiana Counties, played a pivotal role in railbanking the C and I railroad corridor. Railbanking is a “voluntary agreement between a railroad company and a trail agency to use an out-of-service rail corridor as a trail until a railroad might need the corridor again for rail service,” according to the Rails-to-Trails Conservancy website.

When the C and I Railroad decided to close the corridor, the Trail Council and Laurie Lafontaine, Vice President of the Trail Council, seized the opportunity. They began lobbying for the trail and worked with countless community business leaders to secure the corridor for future trail use.

Jerry Brant of the Northern Cambria Community Development Corporation (Norcam) stepped up to have Norcam serve as a placeholder for the transition of the corridor property since the Cambria County Conservation & Recreation Authority was not yet established. The corridor was successfully railbanked in 1995. Norcam eventually transferred the corridor property to the Cambria County Conservation & Recreation Authority in 1998.

Blacklick Twp. Supervisors, Bethlehem Steel, America’s Industrial Heritage Project, Indiana County Parks and Trails, as well as many other local leaders and organizations were also integral to rail banking the corridor so that the trail could exist for generations to come.

The trail extension was named “Stritty’s Way” in memory of 20+ year CCCRA Board Member and trail advocate Tom Strittmatter. Trail users will be able to park at the new trailhead parking areas at Vic Miller Rd. in Belsano and North St. in Cardiff.

The project included the construction of two former railroad bridges on the corridor near Expedite Rd. These bridges are located at the extension terminus and will be completed by mid-late October. A bridge dedication ceremony will follow the completion this fall.