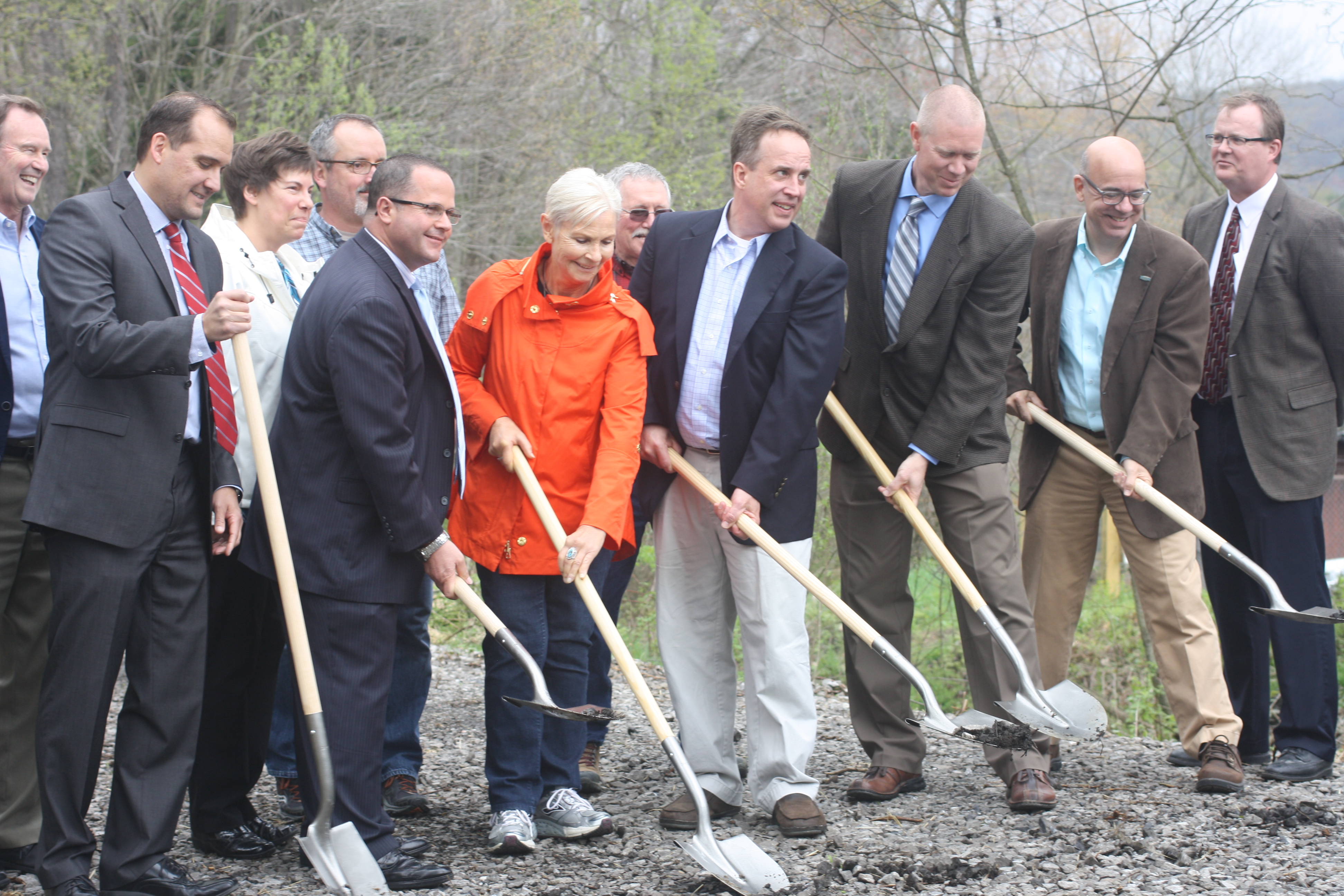 The Cambria County Conservation & Recreation Authority (CCCRA), along with project partners and local officials, held a groundbreaking ceremony for the 8 mile extension of the Ghost Town Trail on Friday, April 21st at the future North Street Trailhead in Nanty Glo. The extension project, which follows the C and I railroad corridor from White Mill to Cardiff, is funded through a PennDOT TAP Grant, with funding assistance from the Community Initiatives Fund and the Penelec Fund for the Future of Greater Johnstown through the Community Foundation for the Alleghenies. Other partners include the C and I Trail Council and Blacklick Twp. Supervisors. To view the map of the Ghost Town Trail network, click here.

The 8 mile extension continues from the end of the current four mile Rexis Branch spur of the Ghost Town Trail at White Mill Crossing, past Belsano Crossing, to North Street in Cardiff. The project includes the construction of two former railroad bridges on the corridor. Once the entire extension is completed, it will be the first continuous loop rail-trail in the U.S., according to the Rails to Trails Conservancy. The approximate 7.5 miles of the extension that remain will eventually connect back onto the developed Ghost Town Trail in Cambria Twp., near the Rt. 219 overpass.

This trail extension project was a long time in the making. From 1994 to 1995, The C and I Trail Council, a volunteer, nonprofit organization established to promote the development of trails and greenways in Cambria and Indiana Counties, played a pivotal role in railbanking the C and I railroad corridor. Railbanking is a “voluntary agreement between a railroad company and a trail agency to use an out-of-service rail corridor as a trail until a railroad might need the corridor again for rail service,” according to the Rails-to-Trails Conservancy website.

When the C and I Railroad decided to close the corridor, Laurie Lafontaine, former President and current Vice President of the Trail Council, seized the opportunity.

“It was like a perfect storm, where these regionally-connected railroads were being abandoned at a rapid rate, and there were a number of funding opportunities available,” Lafontaine said.

Lafontaine and the C and I Trail Council began lobbying for the trail and worked with countless community business leaders to secure the corridor for future trail use. Jerry Brant of the Northern Cambria Community Development Corporation (Norcam) stepped up to have Norcam serve as a placeholder for the transition of the corridor property since the Cambria County Conservation & Recreation Authority was not yet established. The corridor was successfully railbanked in 1995. Norcam eventually transferred the corridor property to the Cambria County Conservation & Recreation Authority in 1998.

“Everybody was looking to us for leadership. If Norcam hadn’t stepped up,” Lafontaine said, “the trail would not have been possible.”

Blacklick Twp. Supervisors, Bethlehem Steel, America’s Industrial Heritage Project, Indiana County Parks and Trails, as well as many other local leaders and organizations were also integral to railbanking the corridor so that the trail could exist for generations to come.

“The extension of the Ghost Town Trail will make the nationally ranked Ghost Town Trail even better,” President Commissioner Tom Chernisky said. “Congratulations to the Cambria County Conservation and Recreation Authority and Norcam for working together and making the extension possible.”

The trail extension will be named “Stritty’s Way” in memory of 20+ year CCCRA Board Member and trail advocate Tom Strittmatter.

“Tom would have been surprised and humbled by this gesture,” Judy Strittmatter, wife of Tom Strittmatter, said. “He was devoted to working on the trails for use by the public.”

Ray Winters & Sons is the project contractor; GAI Consultants is the consulting firm, and The EADs Group is the project inspector. Construction began in November 2016, but a ceremony will not be held until April due to weather. The section is expected to be completed by the Fall of 2017.